Now that I’ve got my green chile roasted and ready to cook with, along with my NM red chile powder and pinto beans, I’m ready to do some serious Mexican cooking. Or, at least, this weda’s version of it. And what’s Mexican food without some fresh, homemade tortillas? I have to confess, we have been leaning more toward a grain-free diet. However, we have not yet arrived, so I’m sharing this recipe because I’m rather proud of it. I don’t know about other cooks, but trying to cook with healthier flours can be quite a challenge. So much so, I had given up on tortillas for a long time. All I was able to produce were tortilla-like crackers. They were usable in enchiladas (when you’ve done without for a while, it’s amazing what tastes good!) and fried up they made nice chips for taco salad or salsa, but burritos were out of the question.

The way I discovered this recipe is pretty strange. One day I was using a recipe for pizza dough that I had altered to fit my ingredients when I decided to make only one pizza, instead of two. I wrapped the leftover dough in Saran wrap and stuck it in the fridge. When I took it out the next day and unwrapped it, I discovered it had the very same texture as masa (tortilla dough); nice and smooth. I thought, “Why not?” and dug out my comal (cast iron griddle). To my surprise, amazement, and delight, the result was a tortilla that tasted just like the ones I made when my kids were growing up. Soft, pliable, dense. There’s just something about the texture of a homemade tortilla that’s indescribable. If you have never eaten a homemade tortilla, you can’t even imagine the difference in taste from a store bought one. Though the ingredients were basically the same (flour, baking powder, salt, lard, liquid), the biggest difference in these tortillas was that they weren’t made with water, but milk. Raw milk. Sour raw milk. I know, I know. Not only does making tortillas with milk sound weird, making them with soured raw milk sounds downright gross. Believe it or not, it did not make a difference in taste. Honest! Why would I use milk instead of water? Well, because I can’t just throw out the sour milk. It has too much good stuff in it to waste. All those vitamins and minerals and stuff. Besides, wasting is…wasteful!

Rabbit trail: I interrupt this regularly scheduled blog to write a few words about milk. The sour, raw kind. Umm, maybe I will skip the raw part. That’s of such importance to me, it’s worth it’s own blog post. Let me just say that soured raw milk is not bad in any way. You can use it in any recipe that calls for buttermilk (or just drink it) and the stuff lasts indefinitely. (At least, at my house) You can even make sour cream with it by draining the whey off of it. Once soured, the probiotics actually increase. Raw milk is completely unlike pasteurized milk, which does not sour, but turns rancid and will make you very sick if you drink it. ‘Nuff said. (For now)

Without further ado, I give you:

Directions:
Add flour, baking powder and salt in a bowl and mix well. Add lard (or oil, if using) and mix well. Add milk and mix until dough forms. Shouldn’t be too dry or too wet – should be easy to work with.

Pinch off a little bit of the dough, enough to equal an amount about the size of a medium lemon. Smooth it into a nice, round ball. The rounder the ball, the rounder the tortilla. I learned that from little Gramo, my kid’s paternal grandmother. (A very godly woman I was blessed to call my other mom while her son was on this earth) Prior to that, I made a lot of tortillas that looked very similar to the state of Texas.

Take the ball and begin to flatten it like you would a hamburger patty. I do this by turning it in my hands as I flatten it. Once it is about the size of a hamburger patty, you can begin to roll it out. I do this by rolling, then turning a quarter turn, couple of rolls, quarter turn, etc, till it is the size I want (a little smaller than the comal). I made a video of this, showing how it’s done, but can’t upload it to wordpress without upgrading with cash. Maybe I’ll find some place to post it free and can then link to it.
(I’m thrifty like that ;))

Carefully lift it and transfer to pan. Cook until bubbles form on top, then carefully flip and cook other side. I usually use a butter knife to lift one edge in order to turn it without burning my fingers. 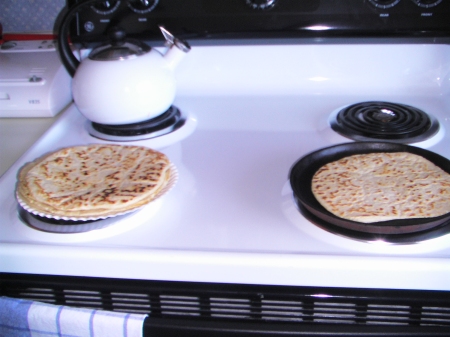 I like to stack them, flipping the stack each time I add another tortilla. This helps to keep them soft until I am done.
Repeat until all the masa is cooked. Use to make burritos, Mexican burgers, or spread some yummy grass-fed butter on them and enjoy! Mmm, mmm!

This entry was posted on Wednesday, September 8th, 2010 at 9:00 pm and is filed under Fight Back Fridays. You can follow any responses to this entry through the RSS 2.0 feed. You can leave a response, or trackback from your own site.